Bluetooth headphones have undergone many improvements since they first became available in the early 2000s. Producing them used to be so expensive that final prices were out of range for everyday consumers. Sound quality left much to be desired as well. Now, they’re more affordable, and of higher quality than ever before. Since they’re so extremely popular we decided to bring you the absolute best Bluetooth headphones available anywhere.

Join us as we reveal what makes the Bluetooth connection great, how to choose the most appropriate pair of Bluetooth headphones, and explore our top five choices.

The Guide to the Top 10 Best Bluetooth Headphones

The pairing process is generally the same no matter what devices you’re using. And it only has to be done once between devices. Once paired the devices just need to be near each other in other to work together. Depending on your preference; the pieces can automatically pair when they’re next to each other, or notify you that they’re close together.

Without cords there is nothing to get tangled in your bag, and they take up less space. Using them won’t require extra time removing knots. Most products simply collapse for easy storage.

No cords also means you can be more mobile. You’re free to move throughout your environment, and can do so without getting snagged on your surroundings.

What’s more, you can totally charge your source device at the same time as you are using it. You can catch up on podcasts even when your mp3 player is plugged in the wall. This is a huge advantage because audio and video can be so draining on your device. It’s multi-tasking at its finest.

This feature makes it increasingly simple to enjoy your media over any number of devices. You could easily start watching a movie while riding on the subway then switch to regular television when you got home without being a nuisance to your roommates.

For example, if you work in an office maybe you’ll want noise cancellation technology. Athletes would benefit from sweat-resistant models.

Other possible extras include cable for an optional hardwired connection, replaceable components such as earpads, and quick-chargers.

And there are even earbud styles. If those pique your interest then you can find in-depth information by looking at our article, Best Bluetooth Earbuds. 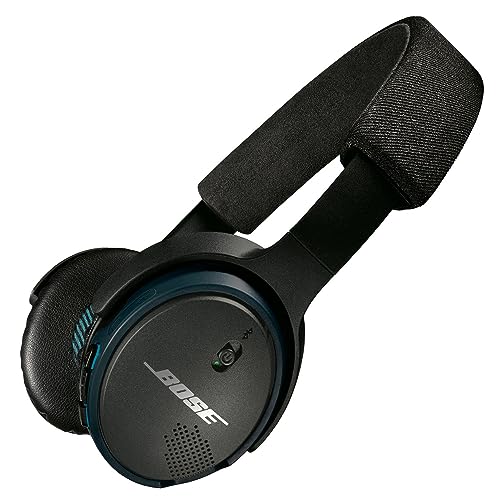 Bose is a giant in the consumer audio industry, for good reason. They continually release products that represent a clear attention to aesthetics and engineering. Bose, in many instances, sets the industry standard for design, build, and sound quality. Their SoundLink is a testament to that.

We first looked at these when researching products for sports headphones. We found its ingeniously simple design to be lightweight and super comfortable; and its sturdy plastic frame capable of going the distance.

What boosts SoundLink’s ratings and makes it one of the all-around best Bluetooth headphones is its versatility. Because of Bose’s superb construction and sound the SoundLink isn’t just sportsman’s equipment; anyone benefits from using these headphones.

SoundLink is comprised of a solid rigid frame and adjustable headband. Its earcups rotate and pivot to grant you the perfect setup. We had no problems trying it on throughout the office. They even fit well for people wearing glasses.

The earcups and headband are padded with memory foam so SoundLink is really comfortable no matter what size or shape your head is.

Their overall structure is secure but lightweight enough for extended use. It’s easily used during long-play media like movies. The padded carrying case that’s included makes the SoundLink easy to safely transport wherever you go.

We made sure to try out the calling capabilities of these Bose. The dual microphone is supposed to keep background noise a minimum so all your caller hears is you. Call clarity was acceptable on both ends with voices not sounding garbled or static. General background noise like that found in your home or office is sufficiently dulled. Still, don’t expect to be able to hold conference calls in the middle of a construction zone.

Charge lasts about fifteen hours, which usually translates to several days of moderate use. In a rush you can get two hours of use from a fifteen minute charge. They can also be used wired; Bose includes a cable for that. This saves on battery power for those times you’re in a confined space our just don’t mind being tethered.

We liked the small extra features Bose included in SoundLink’s call capabilities. Voice prompts keep you apprised of battery life, connection status, and caller identification. Each time you turn the set on it will automatically connect to the first two devices in its memory. Detailed features like these make the device that much more interactive and user-friendly.

SoundLink delivers the immersive sound experience that Bose is known for. Tones are well-balanced. The sound reproduction is simply amazing; you’ll catch all the nuances and details in dynamic audio.

What that means is that these really shine for music and movies. You’ll experience tones that are seemingly lost through regular stereo speakers. The natural warm sound utterly encapsulates you.

With SoundLink, Bose once again delivers an impressive product. It packs up easily, they’re useful for many types of audio, and they’re comfortable for hours. We weren’t disappointed and neither will you. 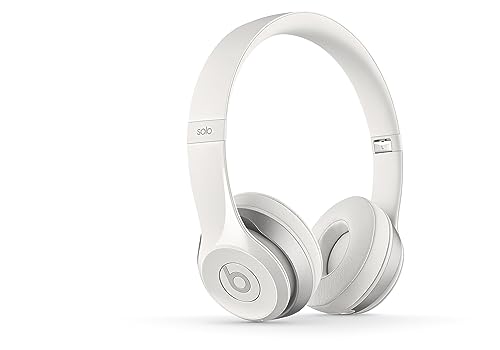 Beats are one of those brands that consumers love to hate, but its high sales numbers don’t lie: lots of people enjoy the Beats sound. And what we’ve found is that the company has taken the complaints seriously and made changes to their products. Enter their Solo 2.

Beats started off right by beefing up the housing giving this one a much more substantial quality than previous models. The hinges are stronger and sturdier than before. The unit feels quite hearty. Despite the seemingly large feel they are comfortable to wear and fold easy to carry.

The pivoting earcups and non-visible screws are a nice touch indeed. Additionally, the headband is flexible. These features taken together allow you to perfectly adjust your fit.

Beats gave Solo 2 a sleek design by not labeling the control buttons on the side.They take some time to get used but aren’t a problem. We found it to be about the same as going from the old 9-key texting format to QWERTY, or going from a traditional mouse to one of those flat panels.

Using the Solo 2 was remarkably uncomplicated; the control buttons were intuitive. We found its 30 foot range pretty accurate. It really depends on how much physical interference you have. There’s always going to be some walls that break the connection and some that don’t. But it did a good job of reconnecting on its own.

Solo 2 are closed-back headphones, and we’ll talk about sound in a moment. But first we want to tell you about a quirk we found in the housing that could confuse consumers. There are air vents on the housing.

People are mistaking these as affecting sound. The holes allow air to flow around the batteries. Batteries have to remain cool our all sorts of bad things happen to electronics. So yes, there are holes in the housing but they don’t relate to the any sound release. Rest assured, the Solo 2 behaves as we would expect.

The soundstage is strong and tight. Its got a wide range we weren’t expecting from the Beats brand. The overall effect is clear. And we found no noticeable quality difference between using them wired or wireless.

The Solo 2 does emphasize bass tones; that’s kind of Beats’ thing. But the Solo 2 seems to keep them better controlled. Bass isn’t as obtrusive as other models. For comparison you could say that the Solo 2 concentrates on the instruments while Soundlink focuses more on vocals. The difference now becomes a matter of preference instead of quality.

Beats’ Solo 2 is a great alternative to the Bose SoundLink. If you’re interested in a deeper sound and a more showy facade then these are right up your alley. 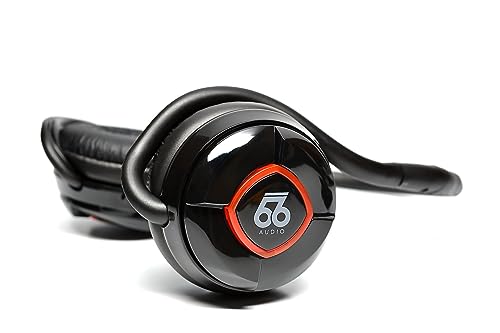 Without a doubt the BTS+ by 66 Audio is one of our best performing products. We’ve already seen that they’re an asset to runners, as well as anyone else who works out or plays sports.

What really sets these apart though is how well they work outside of athletics. 66 Audio created one of those products that you try and then never want to get rid of.BTS+ works beautifully no matter where you are.

At first glance the BTS+ looks kind of bulky. But that plastic frame is quite lightweight. And the headband that goes behind your neck is adjustable.

The control buttons on the outside of the earcup are what give the BTS+ the large appearance. They’re quite easy to use and not obstructive in any way. You easily adjust volume, take calls, change music tracks.

They boast 20 solid hours of play time on one charge, and can be paired to multiple devices at once. This is helpful if you have to carry an extra phone for work or keep files on multiple devices. You’re able to answer either phone on the BTS+, or automatically switch your audio source. If you’re on an iOS device you’ll receive battery meter displays in real-time.

The tonal balance of the BTS+ makes listening pleasurable. Bass is smooth, mids are strong and not muffled, treble is crisp and accurate. The technology 66 Audio uses for noise cancellation doesn’t inhibit the sound quality at all.

BTS+ by 66 Audio is one very well thought out product. They’re so easy to use that you’ll never want to try anything else. 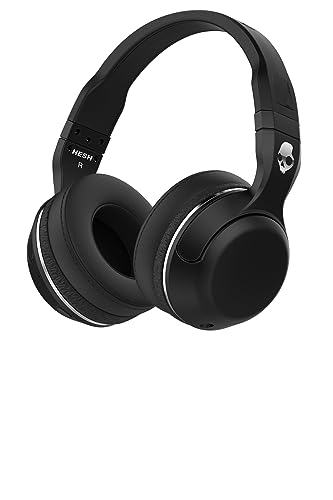 SkullCandy is a master at bringing great sound to trendy-styled gear. With over 20 colors and patterns to choose from, anyone from teenage girls to businessmen can find a Hesh 2 that fits their personality.

The closed-back system and leather earpads are sturdy for sure. And they see slightly heavier than some other models.

The controls on the right ear are usable and function reliably. Switching between music and phone calls was seamless. We did try talking on them during a call, and it works beautifully.

The Hesh 2 sounds great wired or Bluetooth. Though the volume is lower when used as Bluetooth. Otherwise they had acceptable balance, a little on the heavy side. But high tones weren’t damaged.

Skullcandy’s Hesh 2 are the perfect phones if you want to customize your look. Additionally, they’re a less expensive alternative for Beats. But the Hesh 2 give you more design opportunity. 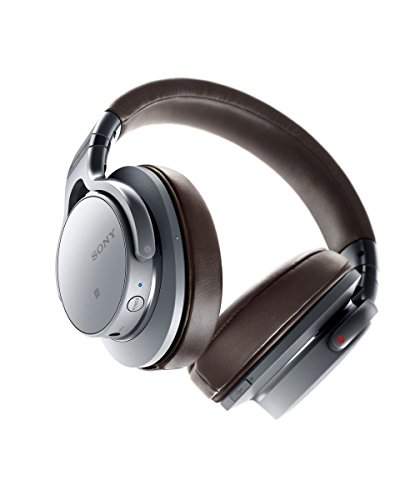 We finish off our five favorite products with a product from one of the most recognized manufacturers in the world, Sony. It came as no surprise that a Sony product would test well enough to be considered one of the best Bluetooth headphones. The MDR1ABT/S perform well and include a bunch of new technology.

The over-ear design and thick urethane cushions fit well. We didn’t feel any extra pressure and were able to move around with ease.

Like other products we’ve discussed these too have on-board controls. The difference here is that it’s a touch sensor rather than buttons or switches. You interact with it by swiping and tapping you earcup. It’s a novel idea and we’ll admit that we felt really futuristic using it.

The 30 hour charge is ample for extended use. It’s possible to watch movies and take conference calls on one charge. It does include a cable for wired use.

The MDR1ABT/S has huge drivers so we were expecting to be knocked over by bass. Instead we found a really nice balance with no harshness in any genre.

The other advance that Sony added is technology that “restor(es) the depth and detail lost in the audio compression process.” This particular feature only really works if you’re paired with a Sony device, but even then you won’t notice it unless you have really sensitive hearing.

Sony MDR1ABT/S is a solid set of headphones. But their higher price point and extra bells-and-whistles make it appeal to a smaller audience. If you like new cool things then here ya go, enjoy!