It can be pretty difficult to find the best headphone amp under 100 bucks. Many people don’t even know that they exist or have encountered them before, and in several cases they will buy something that is far too expensive for their needs.

That’s why this buying guide exists: to help you choose the best headphone amp under $100 for your needs while still maintaining a budget. Cost is only one factor in a market where quality may not necessarily directly correlate, so we’re here to help you navigate this purchase.

If you’re looking into buying the best headphone amp under 100 bucks, there are several things that you ought to be considering. It’s not a purchase for everyone, so it’s important to understand when, where, and how you plan to actually use the item in question. Planning ahead will help you make the best purchase that you can.

Start by considering where you’re most likely going to be using a headphone amp.

The FiiO E10K excels in many ways that other models don’t, bringing a clarity to headphones and a warmth that softens the edges on an otherwise crisp sound.

Among the most useful features that comes with the E10K is the +3 db bass boost which can support even high-frequency recordings with a nice floor and bring more life to the sound without being too intrusive. In fact, the addition of the bass boost switch makes it easier to change frequently between sound profiles for different types of audio or even different tracks on an album with a lot of variant types of song.

About the only major drawback to this amp is that the micro USB cable that comes with it is a little short for plugging into a computer in most cases, but considering the lower price point on this one it’s worth the small extra investment to get a slightly longer cable. That in no way detracts from the quality of the sound you’ll get from the E10K or the options it comes with.

Topping is one of the bigger names in headphone amps for good reason. While they generally focus on higher end offerings, this particular one is more in the price range for the average user and brings their quality to a much wider market.

Not only does it increase the general volume and make it easier to run outside speakers and/or headphones, but it also manages to clean up a lot of the excess background noise that can be created by a motherboard or factory sound output.

The build and design are well conceived, with a compact motherboard that leads to a smaller unit for desks as well as a simple control system on the front that is incredibly intuitive and easy to use. The addition of a USB input on the back makes multimedia much more accessible and audio/video design very simple.

While there isn’t nearly enough power to get good thump out of the bass frequencies, it’s not designed for that and will still be able to serve most people’s needs.

Topping has made an easy to use amp that does exactly what you need it to. 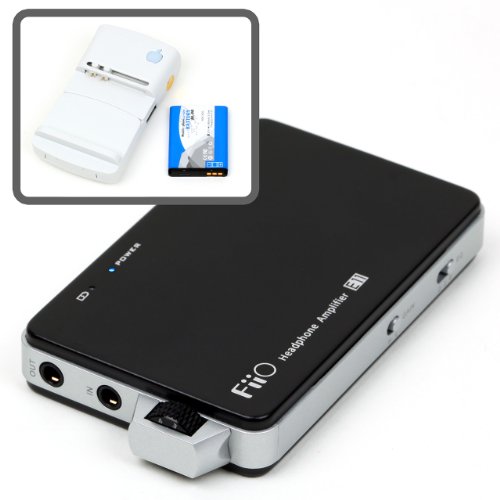 It’s not every day that a high quality portable headphone amp comes along, especially one for a reasonable price, but that certainly is what you get with the FiiO E11.

To start with, it’s smaller than almost any other amp in its class, up to half the size of other portables. At 0.35 lbs, it’s also incredibly light and easy to carry with you in order to enjoy the increased sound quality at any point during the day.

And the sound quality certainly is increased. You can tell immediately how much cleaner everything sounds when played through the E11. The additional volume doesn’t blur out any of the details and each note is sharp.

Another advantage of this incredible amp is that it gives the user the option to select the power gain so as to match with their headphones and get the best possible sound, as well as including a bass boost at the amp which can save battery on the equalizer.

This is one of the highest value amps around, capable of producing great sound anywhere. The Micca accessory set makes it even easier to enjoy your music with an extra battery and stand alone charger. You just can’t go wrong.