Watching TV and movies at home in 7.1 surround sound may sound like a great idea but sometimes it’s just not practical. Maybe you’re in a college dorm or apartment with thin walls. Maybe your roommate or spouse is asleep in the next room. In each of those situations using a set of headphones would work better than large speakers. The best wireless headphones for TV will be comfortable during extended use, connect easily to your television set, and won’t bother those around you.

Since you’ll find so many different styles of wireless headsets for TV we decided to research the market for you. We then compiled everything we learned into this handy guide.

Here we’ll explain what important characteristics to look for, and review our favorite five choices in detail. With this information it’ll be easy for you to decide which set of wireless TV headphones works best for your situation.

No matter which style you prefer you’re likely to find a match within these wireless headphones for TV.

Wireless headphones for tv use one of four kinds of signals: infrared, RF, Bluetooth, or UHF.

Infrared units use a line-of-sight signal like remote controls. You have to stay within sight of the base in order for the unit to work.

RF run on different frequencies similar to cordless phones. The connections are usually clear within about 300 feet. After that the sound may have static and be choppy. Additionally, like with cordless phone, these are prone to interferences from other RF devices.

Bluetooth uses radio signals that are significantly weaker than regular wireless devices. Like RF units, the bases and headsets don’t need to have a line of sight to work.

UHF use frequencies similar to two-way radios. The components have to be close together to work. Things such as moisture and walls interfere with wireless headsets for tv that use this type signal.

Virtual surround sound sends the television’s audio through an extra processor before it reaches your ears. There, the stereo sound transforms into surround sound. Stereo generally tends to be clearer because it doesn’t have the extra manipulating. 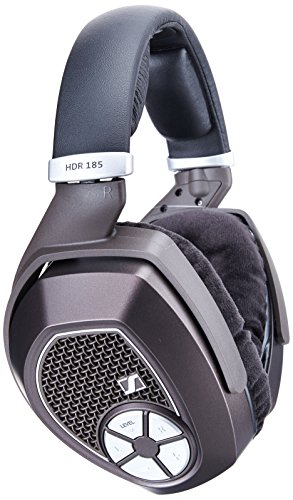 Sennheiser’s RS185 tops our list of best wireless headphones for TV for its accurate sound rendition and sturdy comfortable build.

The overall signature of RS185 is both accurate and detailed; suitable for movies or television. Bass frequencies are slightly emphasised giving them a warmer output. Vocals are very well rendered and perfectly clear. This is especially helpful for understanding dialogue.

RS185 is constructed of both metal and plastic making it surprisingly light and comfortable for its size. The metal headband sits snugly atop your head without grasping too harshly. Plastic earcups help the unit feel weightless even during extended use. Soft velvet covers the earcups keeping your ears from sweating.

Sennheiser RS185 makes a great wireless headset for TV if you’re after an easy-to-use product that really gets the job done. 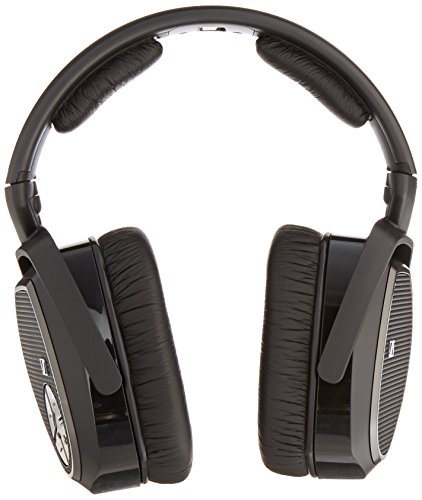 The RS175 by Sennheiser is an unobtrusive unit with several features and theater-like sound.

Sennheiser helps you save space by using one unit as the transmitter and charging station. The whole station measures about the size of a large envelope so it can be easily placed on top of any entertainment center. A full charge can last up to 24 hours so you won’t be stuck if you accidentally forget to dock the headphones after a movie.

Individual audio settings are located on the earcup of each set of headphones allowing for users to control their own experience. The RS175 is equipped with both bass boost and virtual surround sound. Without either of them activated the sound signature of RS175 is quite bright and straightforward; similar to the tones of regular television. Adding bass boost creates a full, rich signature perfect for enjoying action movies. The surround sound feature definitely gives you the overall feeling of sitting within a theater.

This is the best wireless headphones for TV if you have simultaneous users who want individualized sound functions. 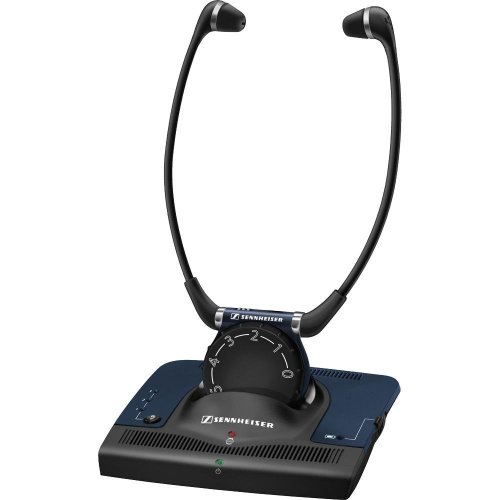 Sennheiser’s SET840 is one of the few wireless earbuds for tv but functions just as well at its full-size counterparts.

Since the SET840 is made especially for television it doesn’t have any of the extra audio features of the other headsets. Its sound signature is tuned to dialogue so bass is barely perceptible. With that said, vocal clarity is superb. Dialogue is easily deciphered from background noise such as laugh tracks in sitcoms or suspenseful music of dramas.

The SET840 has a collapsible metal-reinforced headband that hangs below your chin. At the center is a large dial holding the volume controls. The design is light but somewhat awkward if you’re not accustomed to the weight being under your head.

The control dial makes the unit feel heavier than it is but that’s not a deal breaker since these aren’t designed for extended use. The earbuds themselves stay in place no matter how we positioned our head, but we’d refrain from extreme movements.

Sennheiser’s SET840 are perfect for anyone seeking simple functionality. 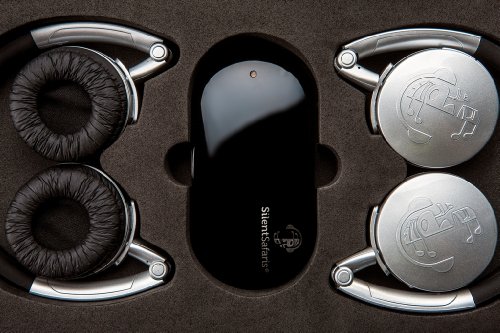 These collapse easily and fit into their own solid carrying case. And, unlike the other units on this list that charge one at a time on its docking station, these can recharge 4 to 10 pieces at a time within their carry case.

Additionally, Silent Safaris are equipped with dual channels and dual transmitting devices. This allows users to switch between devices, and for users to check-in to other active units. Checking in on other units is especially helpful if you are supervising someone’s usage.

Silent Safaris deliver acceptable sound quality with no delay or imperfections. The thing we liked most is how well they isolate sound.

Silent Safaris are wireless TV headphones whose features make them especially suited for families. But they’re a good buy even as a purchase for yourself. 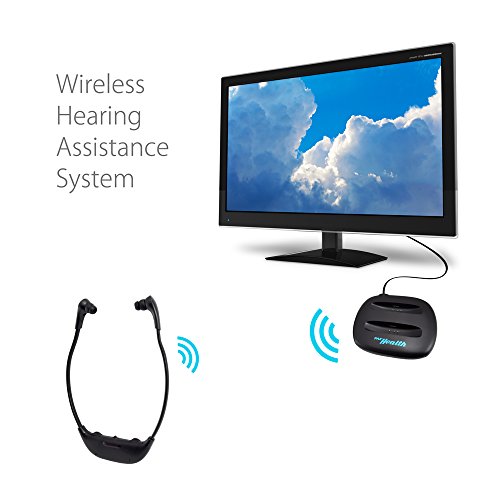 Pyle Health’s PHPHA66 was created especially as an assistive device for anyone hearing impaired. Its sound signature and features reflect this perfectly.

PHPHA66 delivers clear dependable sound. But like all IR units, you have to stay within sight of the transmitter.

Like the SET840, these fit as wireless earbuds. They’re surprisingly light and doesn’t move as we turn our head.

It hosts several controls so that you can tailor the sound to suit your needs. Balance, tone, volume, and power are all easily reached in the unit directly under your chin.

PHPHA66 finishes out our list of best wireless TV headphones for its attention to detail and simple configuration.